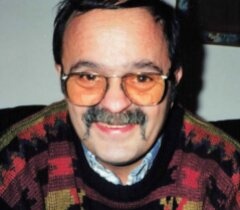 Richard Vito ("Dick", "Shorty", "Cheech") Diliberto, 76, of Frankfort, NY, passed away peacefully on August 6th, 2021 at St. Luke's Campus of the Mohawk Valley Health System, New Hartford, with his loving children by his side.

Richard was born in Frankfort, NY to Silver and Eleanor (Gowett) Diliberto on November 18th, 1944. He was raised in Frankfort and attended Frankfort Schuyler Central Schools where he enjoyed being on the wrestling team. He worked for Union Tools in Frankfort for many years, until his retirement.

Richard is survived by his children, Maryellen and Matt Stoquert of Deerfield, NY, Richard L. Diliberto of Utica, NY, Michele T. Diliberto of Marcy, NY, and Nicholas M. Diliberto of Utica, NY; grandchildren, Jordan A. Stoquert, Kamdyn N. Stoquert, Richard (RJ) J. Diliberto, Joseph (Joey) L. Diliberto; sister, Rosalie and George Dittmann of Frankfort, NY; nephew, Dane Dittmann; uncle Larry Gowett. He is also survived by many lifelong friends including Dominick Purpura of Utica, NY who has been a devoted friend to him and his children over the years. He is predeceased by his parents Silver and Eleanor (Gowett) Diliberto and many aunts, uncles, cousins and friends including his best friend Sal Purpura.

The family wishes to extend their gratitude to the staff at St. Luke's Hospital for their support during his stay and a special thanks to his nurses Kelly and Marissa on 3 West and Dr. Quentin Johnson. In keeping with Richard's wishes, his family will be honoring him in a private ceremony. There will be no public visitation. Richard and his family's care has been placed in the trust of Mohawk Valley Funerals and Cremations, 7507 State Route 5, Little Falls (corner of Bidleman Road) 315-508-5131.
To order memorial trees or send flowers to the family in memory of Richard Vito Diliberto, please visit our flower store.