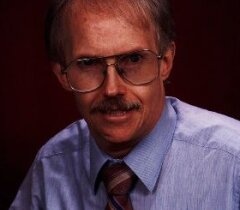 New Hartford, NY-Mr. Roger MacCasland passed away peacefully at Faxton-St. Luke's Healthcare, on Wednesday October 17th, with his sister Sandra by his side. Roger was born on October 8, 1953 at St. Luke’s Hospital, the son of Barbara Fern Whittredge, a Doctor of Psychology, and Willis Eugene MacCasland, a Dental Surgeon. Roger grew up in New York and Arizona, and he earned his degree in Electrical Engineering from Clarkson College of Technology, graduating with a 4.0 GPA.  He worked at Rome Labs until 1981, when a motorcycle accident resulted in a severe head injury, forcing his medical retirement. Roger devoted himself to the Unitarian Universalist Church of Utica, and to serving as leader of his support group, Self Help for the Hard of Hearing. Roger enjoyed administering newsletters for his groups and he made many friends through his involvement.  He was predeceased by his mother, Dr. Barbara Fern Whittredge, father, Dr. Willis Eugene MacCasland, and his nephew, Jonathan Allen. Roger is survived by his sister, Sandra Jean MacCasland of New Hartford, NY, his sister and brother-in-law Patricia Ann MacCasland and Daniel W. Snow of Dewitt, NY, his niece Catherine MacCasland of Satellite Beach, FL, his nephew Brian Mandara of Syracuse, NY and his great Nephew Nicholas M. Allen of Whitesboro, NY. A celebration of life service will be held on Saturday, November 17, 2018 at 4 PM at the Unitarian Universalist Church, 10 Higby Road, Utica. A reception at the church will follow.  In lieu of flowers the family asks that you consider making a donation in Roger’s name to The Hearing Loss Association of America or the Unitarian Universalist Church of Utica.  Mohawk Valley Funerals and Cremations, 7507 State Route 5 (corner of Bidelman Road), between Little Falls and St. Johnsville, 315-508-5131, has been entrusted with Roger's funeral arrangements.  Please click above to add to his online memorial.
To order memorial trees or send flowers to the family in memory of Roger H. MacCasland, please visit our flower store.