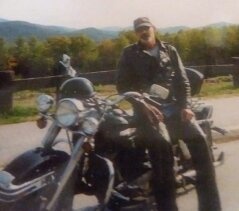 Mr. Ronald J. Hodom "Hodie", 66, lifelong resident of Ilion and most recently of East Clark Street, passed away, on Saturday, October 10, 2020, with his family at his side in St. Luke’s Campus of the MVHS, New Hartford, following an illness.

Ron was born on March 5, 1954, in Ilion, the son of the late John C. and Anne Dedla Hodom and was a graduate of Ilion High School. He was employed with Empire Recycling, Utica, as a truck driver and at one time co-owned the Pizza Plus, Little Falls. Earlier in his career, Ron drove for Richard Obreza Trucking, Mohawk. He enjoyed the great outdoors and enjoyed hunting. Ronald loved riding his motorcycle, playing pool, partying and had a great appreciation for music.

He is survived by his daughter, Shannon Deforrest, his son, Vaughn Hodom; daughter, Emilie Hodom with her companion, Zachary Sweet and his grandson, William Sweet. Ronald is also survived by his brothers and sister-in-law, Mike and Barb Hodom and Mel Hodom; nieces, Kimberly Hodom Koscinski and her husband John, Jr., and Marianne Hodom Boyce and her husband, Ray; his great nieces and nephews, Skylar Koscinski, John Koscinski III and Samantha and A.J. Charan, Raymond Boyce, and Robert Boyce. He was predeceased by his brother, John Hodom and his sister-in-law, Joan Hodom.

In keeping Ron’s wishes, cremation will occur with a future memorial service at the convenience of the family. Donations, In Ron’s memory, may be offered to the American Liver Foundation by visiting www.liverfoundation.org. Ronald and his family’s care have be placed in the trust of Mohawk Valley Funerals And Cremation, 7507 State Route 5, corner of Bidleman Road, town of Manheim, between Little Falls and St. Johnsville, 315-508-5131.
To order memorial trees or send flowers to the family in memory of Ronald J. Hodom "Hodie", please visit our flower store.