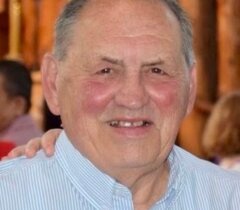 Mr. Ronald Lee Jordan, age 78, a proud Starkville resident, passed away on Thursday morning, November 4, 2021 at St. Johnsville Nursing and Rehab, with the love and support of his loved ones at his bedside.

He was born on February 22, 1943 in Little Falls son of the late Richard and Mary (Coppernoll) Jordan and educated in Owen D. Young Central School. He was united in marriage with Gail Bartholomew on Nov. 10, 1967, in Fort Plain Lutheran Church; a blessed union of nearly 54 years. Ron worked for 25 years with Legg Dairy Supply, Herkimer and retired as a self-employed contractor operating RJ Contracting, Starkville.

Mr. Jordan was an avid hunter. One of Ron's major beliefs was giving back to the community, which he did for many years as a dedicated firefighter with Van Hornesville Fire Department. He also volunteered with Mid-County Volunteer Ambulance Company as a driver.

Survivors include his wife Gail, at home; his children, Richard Jordan and wife Connie Helmer Jordan of Starkville and Russell Jordan and wife Kathleen of Ft. Plain; grandchildren, Andrew, Rebecca and Ryan, Elijah and Robert, George and Becky; great grandchildren, Abigail, Emilia Rose and Ellie. He was preceded in death by his parents and by his sister, Cheryl. In memory of Ron, kindly consider and send contributions in his memory to Ayres Memorial Animal Shelter, 133 Hilltop Rd., Sprakers, NY 12166 or to Van Hornesville Fire Department, 591 Wagner Hill Rd., Ft. Plain, NY 13339.

Ronald and his family's care has been placed in the trust of Mohawk Valley Funerals and Cremations, 7507 State Route 5, Little Falls (corner of Bidleman Road), 315-508-5131. In respecting the wishes of Mr. Jordan, there will be no public services.
To order memorial trees or send flowers to the family in memory of Ronald Lee Jordan, please visit our flower store.