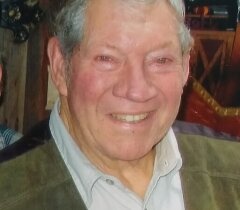 He was the second of five siblings and worked the farm in East Winfield his entire life. His marriage to Hope McCulloch (of West Winfield) in 1971 produced three offspring: daughter, Christy Lohof and Patrick of Montana who have two sons, Hans and Reavis; and grandson Cutlar McCulloch Lohof (who predeceased Sheldon); a son, Grant Hansel and Rachel of Colorado who have two daughters, Lena and Maren and a daughter Shelley Hansel of New Hartford who has two children, Mitchell and Keegan.

Sheldon’s motto was “work hard, play hard”. On the work side, he was a farmer at heart: milked 100 cows morning and night; cleared land for crops; spent late nights repairing and redesigning machinery; designed and built barns, silos, manure pits, and garages. He logged his own woods and served proudly in the Navy Reserves. The family owned and managed twelve apartments to support his farming occupation.

On the “play hard” side his patience, good nature, and persistence earned him life-long friends in his many activities. He was on the ski patrol for 36 years and taught his children to ski at the age of two. Water skiing, baseball, ice hockey, hang gliding, hunting, Saturday night dancing with Hope, and traveling filled any spare time. He skied the mountains of Europe and the hills of his own country. Sheldon lived a beautiful and full life and now has gone to meet his Lord. He will be greatly missed by all.

The family wishes to thank ALL the community and family for their support, with special thanks to caregivers Dawn, Janet, and Diane and to his nieces Heidi, Cindy, Lori, Debbie, and Connie. Their help during this difficult time was invaluable.

Calling hours will be held at the Hansel Farm House, 1605 State Route 20, West Winfield, on Friday, October 23, from 11:00am to 1:00pm and also 5:00 to 7:00 pm. Memorial services will be outdoors on Saturday, October 24, 1pm at the East Winfield Cemetery. Please bring a chair and dress warmly. Sheldon and his family's care has been placed in the trust of Mohawk Valley Funerals and Cremations, 7507 State Route 5 (corner of Bidelman Road), Little Falls, 315-508-5131. Please click above to add to his online memorial.
To order memorial trees or send flowers to the family in memory of Sheldon Gerard Hansel, please visit our flower store.