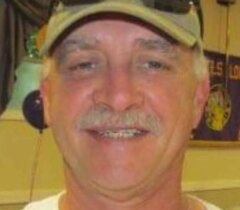 Little Falls, NY-Terry M. Warn, age 59, a lifelong Little Falls resident, passed away early Friday morning, August 24, 2018 at Little Falls Hospital following a three month valiant battle with cancer. At the time of his passing he was in the presence of his loved ones. He was born on November 30th, 1958 in Little Falls, son of Gary Tucci (who passed away on April 16, 2015) and Joanne (Pugliese) Tucci who lives in Little Falls. He received his education in Little Falls school.  Terry spent his life as a contractor and owner and operator of Warn Home Improvements in Little Falls.  On October 22, 1983, Terry joined in marriage with Cynthia Stock at the Universalist Church, Little Falls.  They would have celebrated 35 years of marriage this October.  He was of the Catholic faith.  Some of his favorite things to do was playing darts especially in his league and singing karaoke with his Uncle Joe. Terry loved being outdoors, especially going camping.  His happiest times were spent in the presence of his family an friends.  He had an outgoing personality and enjoyed making people laugh. Survivors include his loving and devoted including his wife, Cindy at home; his mom, Joanne Tucci of Little Falls; his son, Corey Warn and wife Keisha of Little Falls; his daughter, Stephanie Snyder and Jeremiah of Newport; daughter, Jolene Mclain and Michael Metott of Little Falls; eight cherished grandchildren, Jayden and Brooklyn Warn, Madison, Isabella, Ava and Lillian Snyder, Jesse Gorinschek, Taylor Metott; brothers and sisters, Chuck and Ella Warn of Mohawk, Pat and Jim Young of Little Falls, Sue and Lou Sirianni of Little Falls, Deb and Dan Hurteau of Little Falls, Bev and Chris Davis of Ft. Plain, Joey Warn of Little Falls, Lori and John Almaviva of Little Falls and Gary and Jenn Miller Tucci of Little Falls; mother in law, Flora Stock of Little Falls; numerous nieces, nephews, aunts, uncles, cousins and friends.  He was preceded in death by his father, Gary Tucci; grandparents, Joseph and Evelyn Pugliese; brother in law, Gary Stock and by his father in law, Russell Stock. The family will receive relatives and friends at Mohawk Valley Funerals and Cremations (Daniel J. Enea-Owner), 7507 State Route 5, Little Falls (corner of Bidleman Road), 315-508-5131, on Tuesday, Aug. 28th, 2018 from 11 am until 1 pm.  Terry's funeral will commence at 1 pm also on Tuesday, from Mohawk Valley Funerals and Cremations with the Rev. Dr. Steven A. Scarcia, officiating.  Procession will follow to St. Mary's Cemetery, town of Herkimer, where committal will take place. The Warn and Tucci family offer their deepest gratitude to the doctors, nurses and staff of Little Falls Hospital for all of their kindness and compassion during this difficult time.
To order memorial trees or send flowers to the family in memory of Terry M. Warn, please visit our flower store.