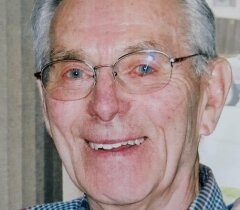 Thomas Strayer Nelson, age 100 passed away peacefully on Friday, August 26, 2022 in Ilion, NY with his daughter, Janis and granddaughter, Sarah, by his side.

Tom was born in Alhambra, California on October 20,1921 to Bess Johnston and Frances Nelson. When Tom was 7, his mother died of tuberculosis. His father remarried and relocated Tom and his sister, Jane (Nelson) Crouch to Herkimer, NY where Tom grew up and met and married his high school sweetheart Gladys "Dips" Cooley Nelson. They later moved to Ilion, NY and then to "camp" in Stratford, NY. After 74 years of a happy marriage, his beloved wife passed away in 2015.

Tom enlisted in the Navy in 1940 and was one of the few oldest Pearl Harbor Survivors left. He was in harbor aboard the USS Wasmuth when the Imperial Japanese Air Force attacked the United States. He left the Navy in 1946 as first class electricians mate and remained in the reserves for another 4 years. He worked in Remington Arms, spent time as a independent contractor and then accepted the position of electrical inspector for Herkimer County for 27 years.

Tom had great pleasure throughout the years hunting and fishing with his son, John and friends. The biggest highlight for many years was the annual fishing expedition to Cape Cod graciously hosted by his friend Terry Baker. He also enjoyed a good game of cribbage with friend, Bob Turley, nephew Dave Crouch and many others.

He took great pride in his "camp" at Stewart's Landing in Stratford, NY that they built themselves and eventually moved to year round. "Camp" was constantly filled with friends and kids and grandkids and their friends swimming and boating and creating great memories of times with Gram and Gramp. Tom was known as a good, honorable man who always stood tall and straight and did the right thing simply because it was the right thing to do. When he shook your hand and looked you in the eye, there was never a doubt about who he was. He was greatly respected and will be tremendously missed.

Although he has outlived most, he leaves behind many good friends including Dave Mackin who has always been there.
He was predeceased by his wife, Gladys "Dips" Cooley Nelson and his son, Thomas Warren Nelson (twin to son John) who passed away at age 4. Surviving family members include a daughter, Dana who moved to North Carolina, daughter, Janis who has been in Ilion with him for the past 3 years and son, John of Mohawk, NY, grandchildren, Julie Nelson Matt (Steve) of Deerfield, Scott Nelson of Mohawk and Sarah Nelson (Matt Snell) of Mohawk, Craig Wardle (Erin) of Massachusetts and Jeff Wardle (Kelly) of New Hampshire, great Grandchildren, Billy Stark, Hannah Streeter (Phil), Emily Snell, Monica and Lauren Wardle, Devin and Jessica Wardle, great-great grandchildren, Phoebe and Ace Streeter.

A family service will be held at Mountain View Memorial Gardens in Little Falls for both Tom and the love of his life, "Dips" at a later date. In lieu of flowers, please send any donations to Hospice Care Inc. in New Hartford, NY who helped guide us through this amazing journey. Arrangements are under the direction and care of Mohawk Valley Funerals and Cremations, 7507 State Route 5, between Little Falls and St. Johnsville, 315-508-5131.
To order memorial trees or send flowers to the family in memory of Thomas Strayer "Ace" Nelson, please visit our flower store.